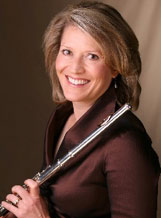 Lisa Byrnes has played Associate Principal Flute with the Utah Symphony since 2000 and held the position of Principal Flute for the 2011-12 season. A native of Northern California, Ms. Byrnes studied flute at the Eastman School of Music and graduated with her BM and MM degrees from the Curtis Institute of Music and the San Francisco Conservatory of Music. Her primary teachers were Julius Baker, Jeffrey Khaner, Timothy Day, Bonita Boyd and Richard Sherman. Prior to playing with the Utah Symphony, Ms. Byrnes played with the New World Symphony under the direction of Michael Tilson-Thomas. She also served as Principal flute for 6 years with the San Francisco Opera's Western Opera Theatre as well as the Sarasota Opera Company. She has performed in several music festivals including Tanglewood, the National Repertory Orchestra, the Chautauqua Festival, the International Music Festival at Evian, France and the Edinburgh International Music Festival. She has appeared as a concert soloist with many orchestras including the Utah Symphony. Ms. Byrnes currently serves on the faculty of the University of Utah and has also served at Brigham Young University. She has been a long-time faculty member at the Sequoia Chamber Music Workshop since 1994. She has enjoyed an active chamber music life performing with groups such as The Left Coast Ensemble, Alternate Currents, Nova Chamber Series, Intermezzo Chamber Series, Three Fish and a Scorpion and Sundays@7 at the University of Utah. 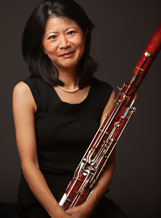 Dr. Yueh Chou has been teaching bassoon at the San Francisco Conservatory of Music Pre-College Division since 2001 and has served as the bassoon professor at San Jose State University since 2011. She holds a certificate diploma in both baroque and classical performance from Koninklijk Conservatorium in Den Haag, the Netherlands (2007). She also has doctorate and a master's degree in music performance from the University of Southern California (2000, 1996) and a bachelor's degree in music performance from the Juilliard School of Music (1994). Her playing is largely influenced by her mentors, Dennis Godburn and Christopher Millard. Her teaching methods are derived from the pedagogy of Stephen Maxym, Stephen Paulson, Frank Morelli and Rose Corrigan. 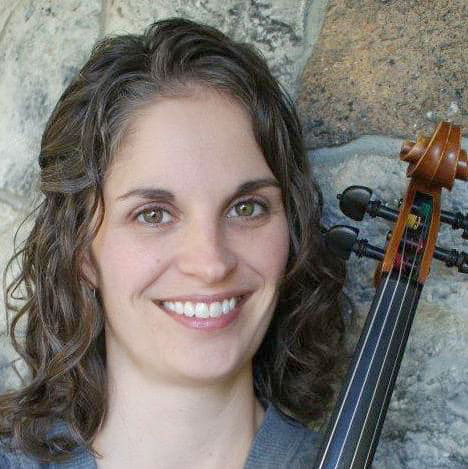 Courtney Sedgwick Filner, viola, is a native of Minnesota and currently resides in Naples, FL. She is the principal violist of the Southwest Florida Symphony and she also plays regularly with the Naples Philharmonic. Courtney has previously held the positions of assistant principal viola of the Richmond Symphony, principal viola of the Stockton Symphony, and has been a member of the viola sections of the San Antonio Symphony, the Florida Philharmonic, the San Diego Symphony, and the New World Symphony. She teaches viola and chamber music at Florida Gulf Coast University and is a registered Suzuki teacher of violin and viola. Courtney holds a Bachelor of Music from Oberlin Conservatory, and a Master of Music from U.C.L.A. 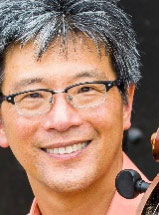 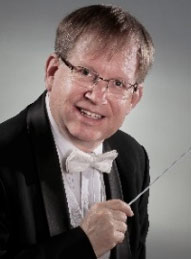 Dr. Bill Harrington, Workshop Director, is on the music education faculty of Cal-State University, East Bay and is Music Director of the East Bay Youth Orchestras (EBYO). Dr. Harrington is currently President of the California Orchestra Directors Association (CODA) which manages all the California All-State Orchestras and the State Honor Orchestras. Formerly Principal Horn of the California Symphony and West Edge Opera, "Dr. Bill" graduated with a four-year full scholarship from the San Francisco Conservatory of Music in French Horn, holds an M.A. in Music Education from Cal State University, East Bay along with a California Lifetime Teaching Credential in Music, and received a Doctorate in Music Education from Boston University. Following his dissertation, "Collaborative learning among high school students in a chamber music setting," he has become a strong advocate for chamber music education. 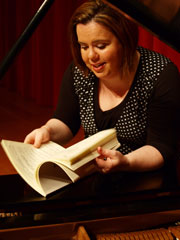 Born in Bulgaria, Daniela Mineva graduated from Sofia Music Academy with a Bachelor of music in Piano Performance and has a Master of Music in Piano Performance and an Outstanding Graduate Diploma from the University of North Texas, as well as an Artist Certificate from Northwestern University and Doctorate of Music Arts, and a Performer's Certificate from the Eastman School of Music. She has been the winner and finalist in numerous international competitions, including 2007 Jean Francaix piano competition in Paris, France and the 1998 Steinway International Piano Competition. Ms. Mineva has participated in many chamber music festivals and summer programs, including the Tanglewood Music Festival, and Institute for Contemporary Music, New York. Currently, she is professor of music and director of keyboard studies at Cal Poly Humboldt, Arcata, California. Previously, Dr. Mineva has taught at Eastman School of Music where she was awarded TA Excellence of Teaching, and Concordia University–Chicago. She is also co- director of the North Coast Piano Festival and Competition.

Thomas Nugent, oboe, holds a bachelor's degree in music from the San Francisco Conservatory of Music, where he was a student of Marc Lifschey. Mr. Nugent is a founding member of the Left Coast Chamber Ensemble and currently holds the principal oboe position in the Sacramento Philharmonic, Sacramento Opera, Sacramento Choral Society, Stockton Symphony, Mendocino Music Festival and the Bear Valley Music Festival. He has performed with the Oakland Symphony, Santa Rosa Symphony, San Jose Symphony, Freemont Symphony, and the Marin Symphony. He is on the faculty of the University of the Pacific Conservatory of Music and performs as artist-in-residence with the Pacific Arts Woodwind Quintet. He also is the oboe instructor at Mills College.

Rick Shinozaki is Principal Second Violin of Symphony Silicon Valley and is on the faculty of the Crowden School in Berkeley. Until recently a member of the acclaimed Del Sol String Quartet, Rick has recorded twelve commercially released albums and toured nationally and internationally. Rick has participated with Del Sol in commissioning and premiering numerous important works for string quartet, from Terry Riley, Mason Bates, Gabriela Lena Frank, Chinary Ung, Tania León, Peter Sculthorpe, Per Nørgård and many others. Rick has performed regularly as Concertmaster for the Nova Vista Symphony, for the Vallejo Symphony, and for the Hot Springs Festival Orchestra (recording for Naxos). His solo appearances include world premiere concertos by Durwynne Hsieh and Viennese composer Zdzislaw Wysocki. Rick has a passion for creating performance editions of music scores – collaborating closely with composers William Jay Sydeman, Durwynne Hsieh and Mark Fish, commissioning, performing and editing their work. Rick is a protégé of Serban Rusu of Tiburon; he also studied extensively with legendary pedagogue Josef Gingold and Yuval Yaron at Indiana University, from which he holds a Master of Music degree. Equally fluent in piano and viola, Rick teaches a thriving student studio on all three instruments based in Albany, California

Garrick Woods comes from a family of professional musicians and studied music extensively from his earliest years. While cello remains his primary instrument, he also studied trombone, voice, bass, and conducting. Primary instructors included Mark Votapek, Nancy Green, John Eckstein and Pegsoon Whang, with supplemental instruction during Summers from Pamela Frame, Emílio Colón, Steve Balderston, and Janos Starker. Dr. Woods holds a B.A. and an M.A. from the University of Arizona and has a DMA from the University of Utah. Dr. Woods delivers emotionally stirring performances in various classical genres. He regularly performed as a member of the Tucson Symphony and as a substitute for the Utah and Hawaii Symphonies. Dr. Woods also performed as a studio musician on many television, game, and film soundtracks. He currently holds the title of Assistant Professor at Cal Poly Humboldt teaching cello and bass as well as directing the Humboldt Symphony.

For security & reliability purposes, this version of Internet Explorer is no longer supported.

Please upgrade to a modern browser: